A few days back we had a most defining and immersive experience on a cruise on the Brahmaputra. This was my third (or fourth) cruise across the mighty river.

We started from Guijjan, a small hamlet near Tinsukia, at 7 am, in a small boat. Our destination was an area called Maili in the upper reaches of Brahmaputra where some wild horses had been sighted by forest people. The journey was supposed to take 4 hours.

During the rainy season, junglee horses move around, as their original settlement around the Dibru Saikhowa national park is flooded.  The Dibru Saikhowa is fed by the Brahmaputra and Lohit and Dibru and an interlaced galaxy of small and big tributaries. Our boatman informed us that we were going towards the Siang (or Dihang, pronounced as Dehing) River, another of those distributing and feeding tributaries that weave in and out of the main river.

It was mildly raining and the boat ride itself was a joy. The Rangagora tea estate to the left was one of the first sights on the ride. There had been reports of feral horses sighting there a few days ago, which brought the horses to our mind and so this trip. During heavy rains, the estate gets flooded and some portion of its bungalow stands knee deep in water.

The boat ride seemed to be through one of the last of the remaining pristine areas of the country, relatively wild and untouched. For miles there was just the flooded river banks, with many trees uprooted or submerged, miles of river and jungles on the side, with the drongos, babblers, sparrows, swallows, kingfishers keeping the boat company.

The feral horses are apparently descendants from horses used by Britishers during the WW2.  A few of them escaped and their tribe has grown in the past 80 years to almost 79 horses. Of course, as in any rare species in India, they are endangered, with poachers and hunters looking for them to sell them as race horses or to resort owners.

As we went on, we came to the Laika village. It is mostly inhabited by the Mishing tribe. The entire village is on stilts with willow fences separating the houses. The residents use the river for all their activities. Boats, kids, fishermen, bathers and just watchers thronged the bank. The kids were adept at rowing and could be seen on boats and on the muddy field beyond the bank, playing. The houses had goats, cows, vegetable patches and most importantly solar panels to provide the much-needed light at night to keep away wild animals. 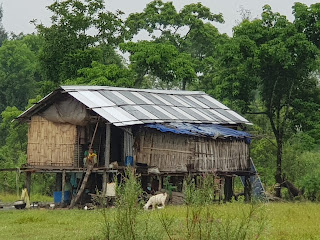 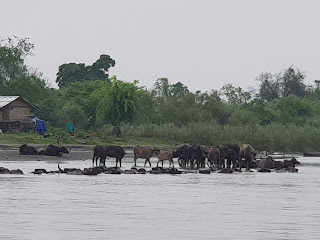 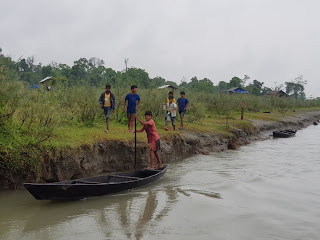 Speaking of wild animals, we heard an interesting tale from one of our forest guards about an old lady who was settled in these riverine wilds. Her kids moved away as they grew older but she refused to budge from her home. She was eventually trampled by a herd of elephants while she slept. Whichever area looked a bit destroyed, like trampled grasses, broken poles, solar panels, you knew elephants had been there! And our guide helpfully informed us that people didn’t die from common diseases like diabetes or cancer here. I guess wild elephants and snakes took care to keep the population under control!

As we progressed on our way upstream, we came across a huge banyan tree inland where there was a forest camp and which is a favourite with trekkers. My husband had done some trekking there with a friend, in the dry season, some months earlier. It was huge and its canopy seemed to stretch on for acres!

In between there were forest watch towers and forest guard house boats, which accommodates around a dozen people, parked on the silty banks. One could see the silt and the bank falling off at many places and trees submerged in the partly flooded river. During full floods, the chapori (the riverine plain villages) are totally submerged and the inhabitants move to different areas, in fact they apparently move lowland as the silt gets deposited there!

We picked up a couple of fishermen who were walking upstream. They had their nets at a particular area, which apparently had some particular fish which sells at a huge premium in the market! Most locals moved around with a hatchet, to cut fishing ropes, brushes and bushes, I guess.

The boat got stuck at many beels (mud flats) and had to steered by hand many times. The flats were not visible in the flooded water. Our journey which was to take 4 hours finally ended up taking 5 hours!

Our biggest surprise was a couple of dolphins leaping up at us! We were totally unprepared to encounter the “Gangetic” dolphins which seemed to populate the area.

At 1 pm, after 5 hours of an eventful boatride we reached the Maili forest camp. The guards told us the horses had been sighted 2 days back. So we started on a trek in search of possible sighting of those elusive creatures. Along the way the couple of forest guards who had obligingly accompanied us enquired of fishermen about the possible whereabouts of the horses. After one hour of trekking through deceptive mud flats, brushes, fields, along the river bank, we reached a small hamlet. A couple of kids told us they had seen the horses in the morning at a distance, so we followed them for half a mile to the area they had last seen the elusive creatures. Obviously they were not waiting for us! We trekked back to the, desolate, two and a half cottage, hamlet and from there proceeded to the boat.

5 hours of boat journey and 2 hours (5 miles) of trekking gave us an inside look into the Brahmaputra in Upper Assam like no other! The return journey took just 3 hours as we were going downstream. 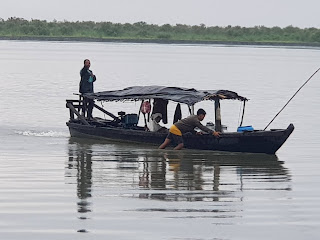 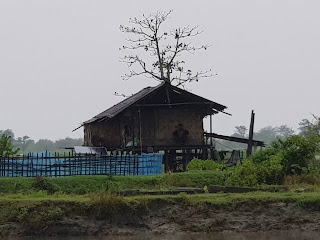 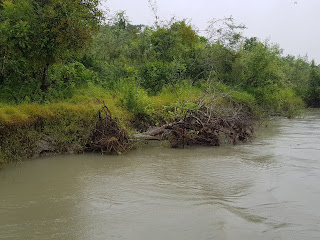 Mighty is just one small adjective for the river. It is definitely mighty. And not just in width, breadth and length. It supports a humungous biodiversity that includes natural forest reserves, rare birds and plants, settlements along its bank, livelihoods for people in three countries, tribes that make a living solely out of it, water to the plains, a plethora of sub terranean life including the edible fish that is the staple diet of people whose life it touches and beyond.

I have given some maps to show the location of the Dibru Saikhowa National Park and the place I am talking about. 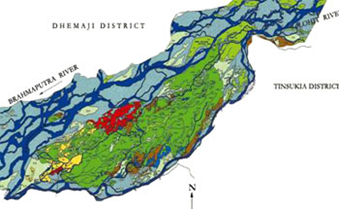 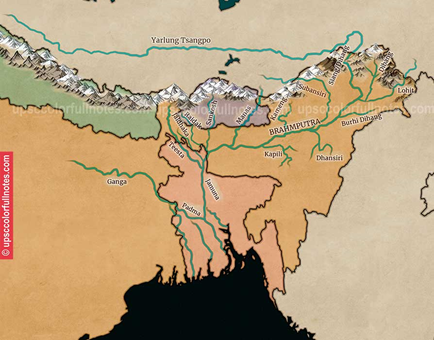 Popular posts from this blog

March 25, 2021
Come March, the people of Odisha have to start battling the high and dry heat of an early summer that kind of side steps over what is supposed to be “Basanta Rutu” or Spring season; a season supposed to buffer the summer and be mild, but which slyly gives the state a miss. Summer is all of a sudden upon us, before we have even packed away our winter clothes. We start feeling the departure of winter when the vegetables, fresh beet and carrots and cauliflowers and laukis and peas suddenly start looking dry and withered, then one day suddenly lose their taste. Then comes the loo, the dry wind that the river bed brings in during the mid-day, that is suffocating and all pervasive. Suddenly the swarms of mosquitoes disappear and you know that the temperature is hovering around the 40s mark. But, the real indicator, that Summer is here? The Pakhala . The dish whose images have started doing the rounds of social media in recent years, and so much so, apparently, a day has been dedicated to it!
12 comments
Read more

January 22, 2021
The morning of my third day at Fort William, I started for Ben Nevis. Ben Nevis is the highest peak in the British Isles and a favourite with trek lovers. It is a one day trek and one can easily reach the top if one plans accordingly. The walk from the B & B to the mountains was a distance of 3 kms. Not being an early waker, I reached the spot around 10 am. The beautiful walk had a curling field on the way. Curling was a popular old sport in the highlands which combined the raw strength of the Highlanders with strategy and skills. One has to slide huge round stones from one end of the play area to the other to reach its destination. It is called curling as the stones take a curvilinear path to reach the circle at the other end! Curling Field, Ben Nevis Reaching the foothills of the Nevis opened up a sight of a series of hills so breathtaking in beauty as only something so far up on the hemisphere can have. A stream bubbled along the foothills (River Nevis actually) and one had to
18 comments
Read more