The Royal Channel is streaming live online free the much awaited Royal Wedding of Prince William to Kate Middleton for us plebeians! So whichever part of the globe you are you can see the Prince Say I Do!

Here is the link to the much awaited nupitals. With the reaction and coverage from around the World one would be blamed for thinking it is a divine wedding!

Meanwhile here is the wedding invitation. And being the real Princely invitation it has no need to be pretentious! 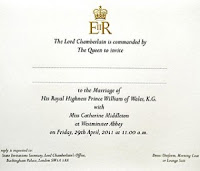 There is more news for the Royal Wedding Watchers - Westminister Abbey will be tweeting the Wedding Live. Follow the Wesminister Abbey Tweets here

http://twitter.com/#!/wabbey and get the Royal Wedding Tweets live!

Are you in search of the perfect cocktail dress? Go Black! The little black dress has a rich history and you will be in the exalted company of Audrey Hepburn, no less - who made the black dress so famous. Yes, the gamine, petite, elfin, waifish Audrey Hepburn went black in Breakfast at Tiffany's and created history and a dress eventually auctioned for £410,000!!!

Read this to find out more about Audrey Hepburn's Little Black Dress from Breakfast at Tiffany's!

The Perfect Little Black Dress - Audrey Hepburn Having Breakfast at Tiffany's
at April 21, 2011

Who says Harry potter is just for teenagers? I have loved the series from day 1 and waited and waited for the books to come out when Rowling was in the middle of the series. However the movies dont really do justice to the complicated world of Harry Potter. They are good - but not really classic like the books. So if you have heard of Harry Potter - first read the books before getting hold of the DVD!

Yes IPL 4 is live online free streaming online. So all those facebook addicts, net watchers and internet addicts - you dont have to leave your laptop to catch the IPL live streaming online. And you dont need a shady digital or dubious channel to watch the 20 over cricket. Indiatimes has bought the rights for this ediion of IPL (IPL 4) to webcast all the matches of IPL 4.

The site has already had a huge influx of visitors for the first couple of matches. The matches can be caught live ANYWHERE in the world!

Meanwhile get the ipl complete schedule and fixture at

Watch the ipl 4 live online at Indiatimes at

(Some portions of the article originally published at Xomba.com - http://tinyurl.com/3ep62c4)

Is Tendulkar the greatest of them all? His teammates think so. They chaired him around the grounds and acknowledged his contribution to Indian cricket in public. I am sure no accolade in sports is greater than the one given by teammates - with whom one has toiled and sweated for years. It would have been pretty unfair if the 38 year old were to retire without THE Chalice in his hand!

This article is however just my first hand experience of watching India win the Cup - not on Tendulkar.


I was not savouring the win from a box seat with the celebrities at Mumbai Wankhede Stadium - but the view and emotions from my sofa seat at home, watching with friends was just amazing. India won the Cricket World Cup after 28 long years. We have grown up remembering the moment when a smiling Kapil Dev with Mohinder Amarnath beside lifted the trophy 28 years back on 25th June, 1983 - while firecrackers went off outside and the drawing room literally exploded! Then we have spent decades watching TV replays of the same images of Kapil Dev spraying champagne and lifting the trophy!

Now finally after a wait of almost three decades the images will be changed and hopefully India wont have to wait too long to savour another such moment of cricket glory!  Instead we will have replays of Tendulkar being chaired by teammates, the team all speaking for each other, Dhoni keeping a low profile and not really (or at all) hogging all the limelight - and everyone saying it is for Tendulkar. It is for India too.

The Man of the day is undoubtedly M.S. Dhoni. India's coolest captain by far. He is also the bravest, luckiest, smartest and the best. In four years of captaincy when he started out as the T20 Captain - Dhoni has got the T20 World Cup for India, Made India the No. 1 test team, won the IPL and ICL trophies for his Chennai team and now finally the biggest of them all - the Cricket World Cup with a super duper innings of 91! I think he should just retire and savour his victories - he has won 'em all!

Dhoni was undoubtedly brave today - coming out to play in the finals with India needing 160 odd runs with 3 wickets down. He was not in form, he wouldnt have been blamed if he had come down the order. Maybe he remembered Yuvraj's duck against Pakistan or just decided to tease the opposition with the thought of Yuvraj and Raina still being in the pavilion. Whatever, he decided to come after the third wicket fell and took the game away from Sri Lanka with an awe inspiring chanceless innings of class and bravery. lets not forget Gambhir's innings of 97 or the 83 runs partnership between Gambhir and Kohli. Zaheer and co too did a great job restricting the strokeplay of the openers while Sangakkara was snapped by team mascot Yuvraj Singh. Even Sreesanth had his use. He is apparently the team's lucky charm!

Just another thought that no one will be voicing - would India have won if Sachin had scored a century - unless Sachin carried his bat through. Some kind of atrophy seems to seize the rest of the team the moment the great man performs! All in all I am happy - the team still managed to win inspite of the moment of despair at 31 - 2!

Many of the Pics are initial shots from TV from my iPhone. Sorry for the awful quality!

This has been an amazing Indian win in the Cricket world Cup!


and more moments from the month long World Cup